Stranger than fiction. You can’t make this shit up.

David Nickle is an author whose works of fiction are dark, imaginative and creep me the fuck out.

He also a covers Toronto politics for a local media group and, in recent days, his Tweets on #topoli have been stranger than the fiction he writes.

Back in June, when it was revealed that our beleaguered mayor had been caught on video, possibly smoking crack and otherwise being an idiot, local literary maven (may I call you maven?) Emily Keeler approached some talented friends to create fiction that was stranger than what was apparently the truth about Rob Ford. The result came six days later in the shape of a special edition zine: Everything is Fine, published by Little Brother Magazine. I bought 1% of the now sold-out print run.

In the introduction to the collection, Ms. Keeler wrote:

When truth is stranger than fiction, one needs to read stranger fiction.

With the latest batch of revelations about Rob Ford, I think that we’re going to need some stranger fiction. 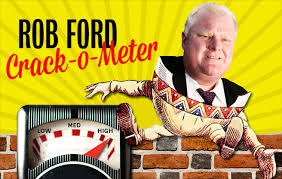 Stuff on my Shelves

Stuff I Wrote About

Where You Can Reach Me